I spent 1.5 days this week in the Siemens Crystal Building in London’s Docklands area, attending Amtech‘s second Crystal Clear BIM conference. Friends commended the first conference last year; I had other commitments then, but this year Amtech’s marketing guy Dean Bryans contacted me in good time and I ring-fenced as much time as I could.

When a building services software company organises a conference, you suspect you may be “hard sold” their solutions, but the Amtech event was low on hard-sell and high on networking and good quality, sharable content (see my Storify stream). OK, some of it came from corporate partners (stands included Soluis, SysQue, Concerto, Excitech and Faro), but there was also a good selection of UK BIM speakers – with the UK BIM Task Group‘s Simon Rawlinson and Rob Manning talking on the first day and David Philp on the second. The event was also not UK-centric – other highlights included some European BIM perspectives from the Netherlands and Norway.

Slightly coy about their relationship with Amtech, Chelmsford, UK-based Edocuments had display space at the conference. Founded in 2001 by Lester Morgan and Jamie Dupée, the company originally offered technical authoring and compliance documentation services, mainly to construction contractors (its customer base is still 70% contractors), helping companies compile paper-based operation and maintenance manuals for handover to a built asset’s owner/operator. At first glance, its acknowledged competitors here include Dome Consulting (post), Aconex’s acquired Grazer technology (post), and the O&M modules of solutions such as Conject. 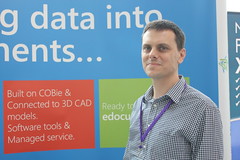 Applications director Jamie Dupée identified that IT could streamline the O&M manual production process, but Edocuments has taken it beyond the delivery of Word pages or similar electronic documentation (and helped differentiate themselves from the afore-mentioned would-be competitors). The company determined that creating standard manual pages wasn’t efficient; instead, its Software-as-a-Service (SaaS) platform helps its users create all the information components that make up a document. These fragments (XML blocks) can be compiled on-the-fly into standard deliverables, but can also be data-mined and elegantly incorporated into different user views of the accumulated information. While they may look like documents, the ‘pages’ are created from databases of relevant information; Microsoft Azure is part of the technology platform.

Edocuments currently employs around 23 staff, and is still heavily dependent on its technical authoring and related consultancy services. However, Jamie told me that trials had begun with key customers to get their supply chains to use its online service remotely and submit information, completing standard templates. The Amtech conference included a CIBSE/Arup/Hoare Lea presentation about product data templates and product data specifications – so it’s easy to see how such standardised approaches could see COBie-based product data quickly assimilated into handover and FM information.

I asked Jamie if the technology could be licensed to other manual authors to help them compile O&M information. It could, he said, and we then talked about opportunities to license the technology to SaaS collaboration (and would-be common data environment) providers such as 4Projects, Asite and Conject, so that they could index content collated during BIM collaboration. He was open-minded about the prospect: “via an API, we could import the data, and then, as a value-adding business, validate the provided information,” he said.

The system is already being used by UK main contractors such as Laing O’Rourke (which has a long-standing relationships with SaaS collaboration vendor Asite); Edocuments’s Amtech exhibition stand also highlighted the system’s use on the Manchester Town Hall project – one of the UK’s pioneering public sector BIM projects.

When I learned Edocuments was based in Chelmsford, I was reminded of another AEC document management company, Dochosting, based in the same Essex town, which I briefly looked at nearly eight years ago (September 2006). Jamie told me they were unrelated though they have done some past work with Dochosting.

Permanent link to this article: http://extranetevolution.com/2014/03/edocuments-enabling-om-data/