Take care with those AEC IT surveys

While many UK construction folk have been visiting east London’s ExCEL and wandering around the Ecobuild exhibition halls this week (more about this later), in the US, it’s ConExpo-Con/Agg time in Las Vegas. Among the technology exhibitors at the latter (at booth 65180) is mobile field management vendor FieldLens.

FieldLens has been on my radar for about a year, and I wrote about the company in October 2013, when its mobile-first approach to construction collaboration grabbed my attention, along with its shift from email-type communication processes to mobile-friendly short-form status updates and messaging shared via news feeds similar to Facebook’s Timeline. Then the service was free for beta testers. ConExpo 2014 sees the official US launch of FieldLens (news release). CEO Doug Chambers has emailed beta users to say:

After more than a year of building our product, testing, listening to our beta users, rebuilding and even more listening, FieldLens has officially launched to the construction industry.

… Our mission has always been to provide you the best field management tool possible, and we can’t wait to show you what we’ve built. Sign up for your free trial today to see for yourself.

And we’re just getting started – we’ve got a development pipeline full of new features that will blow your socks off in 2014. FieldLens is about to become the most important tool on your jobsite.

After the free 30-day trial, users can sign up and pay US$15 per user per month (if paid annually; $20/user/mth if paid monthly). FieldLens is designed to help construction professionals document, assign, and manage site issues using any smartphone or tablet (well, so long as they are iOS or Android) or the Web. The news release says:

FieldLens is the first and only social media technology developed specifically for the construction industry that enables entire project teams to instantly connect and collaborate with one another. Everyone on the jobsite, from subcontractors and general contractors to designers and owners, can use FieldLens for streamlined communication and collaboration in the field.

Information is organized into project-specific newsfeeds that are filterable and contextually searchable, similar to popular social media platforms.

Users can coordinate tasks and communicate privately with their co-workers, assign and track jobsite issues with other companies, and easily export branded reports and live project feeds to both users and non-FieldLens users alike.

Social media platforms like Facebook and Twitter connect people using realtime newsfeeds that allow for instant photo sharing and news updates. FieldLens uses a similar process, but has made it more robust to match the real-world workflows and needs of construction projects. 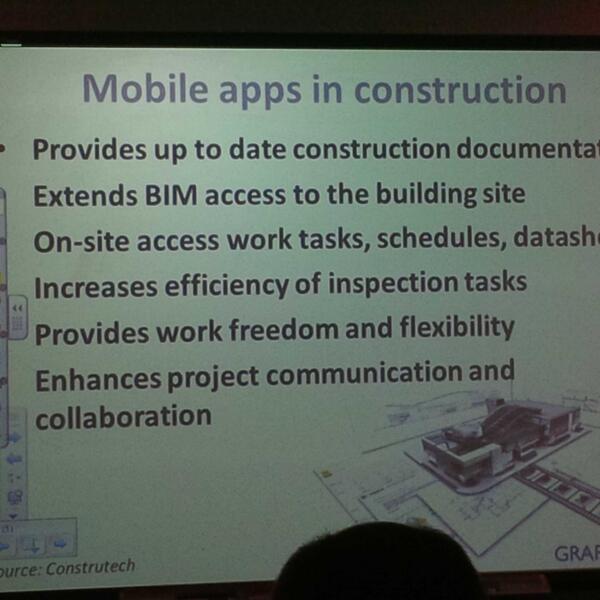 At ThinkBIM, Graphisoft says the future is mobile

I included FieldLens in a presentation I did at a joint ThinkBIM/COMIT event in Leeds earlier this week (Storify stream). It is one of a host of AEC-oriented service businesses which have sought to capitalise upon social media or mobile (or both – I dubbed it ‘mocial‘) approaches to communicating and sharing information. The explosion in use of mobile technologies, particularly since the advent of smartphones and tablets (Apple’s iPad was first launched in October 2010), has, I think, also stimulated increased use of cloud-based services and growing demand for real-time communication.

This challenges existing vendors of what I now regard as increasingly conventional SaaS construction collaboration platforms. Established as centralised repositories for documents and drawings, and providing workflow management and other capabilities, they captured the traditional paper and email-based methodologies circa 2000 often with response and reporting timescales to match. Some have, of course, responded by creating their own mobile field applications, but their core systems still tend to reflect the one-to-one or one-to-few and asynchronous nature of most AEC project processes.

Companies like Fieldlens and Denmark-based Geniebelt (recent post) are aiming to challenge the incumbents, looking to offer a simpler, more intuitive, more mobile, open and real-time approach that reflects contemporary technology use. Their apps will also appeal to the new generations of ‘digital natives’ entering AEC professions who can be frustrated by the slow, closed and non-collaborative nature of the conventional platforms and processes. With BIM also providing some much-needed industry disruption (the ThinkBIM event included a demonstration of Graphisoft’s BIMx Docs – see post), we could yet see the dramatic improvements in the quality and speed of collaboration within the AEC industry demanded by Sir John Egan and others some 16 years ago.

Permanent link to this article: http://extranetevolution.com/2014/03/real-time-mobile-and-social-fieldlens-launches-at-conexpo/