4Projects: the future is cloud-based everything

Now dubbed 4Projects by Viewpoint, the collaboration solution is spearheading wider adoption of SaaS across the Viewpoint portfolio.

I attended most of the second day of the 4Projects user conference in Newcastle yesterday (Thursday), hoping to hear more about the parent company Viewpoint Construction Software’s plans for its locally-based UK Software-as-a-Service construction collaboration vendor subsidiary. I wasn’t disappointed; the two breakout sessions discussed the roadmap for the 4Projects BIM Hub, and, some 15 months after Viewpoint acquired 4Projects, plans for the overall convergence of the group’s collaboration and ERP product suite. I also noted some alterations to the company branding.

As a marketeer, I’d noticed some subtle changes to the 4Projects branding. First, my company contacts recently switched to Viewpoint.com email addresses. And, second, the event’s literature sported a new logo – changed from “4Projects – a Viewpoint company” to “4Projects by Viewpoint” and the event was titled, somewhat inelegantly, the “4Projects by Viewpoint Customer and Partner Forum”. It appears that the business (like UK competitor BIW which rebranded 15 months after it was acquired by Conject in December 2010) is gradually moving towards being rebadged as Viewpoint, with 4Projects becoming just a European product name – at least for the time being (the Australian product, now apparently sold by a direct sales team rather than through a partner, having adopted the US branding of Viewpoint for collaboration).

John Adams, who heads up 4Projects’ 4BIM efforts in Newcastle, led a session on the BIM product line and roadmap. He looked back to the publication of PAS1192-2 early last year, and then explained how its recommendations for a Common Data Environment are reflected in 4Projects project model information delivery processes covering Employer’s Information Requirements, BIM Execution Plans, single design models and master design models, etc (“4Projects also manages the grey boxes of workflows like approvals”). 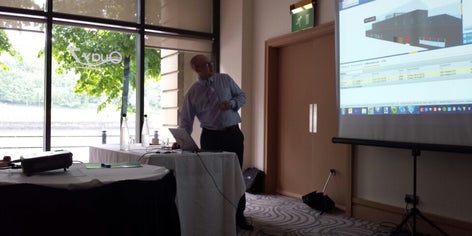 John demonstrated (as far as the wifi of the Copthorne Hotel allowed) the 4BIM viewer showing how users could navigate around a visualisation of the model, drill into work breakdown structures and even edit COBie data. The platform has clearly matured since I saw it in March 2013, with new functionality and workflow support being added to support BIM-based collaboration.

There was a lively discussion of the partnership between 4Projects and Solibri (January 2014 post) and of how model validation fitted into BIM processes (still a lot of work to do on creating rule sets it seems, and I detected some scepticism about the industry’s overall BIM readiness, summed up by one experienced information manager: “I feel like I bought a rocket to go to the moon, but I got a big box of parts and no instructions”). John then talked about the BIM Hub roadmap, describing, for example, BIM dashboards that would help users see at a glance how complete their models were for different data drop purposes. He also mentioned “social walls” that could be used to provide better quality discussions about project design, a continued integration path with other Viewpoint point solutions, and more mobile BIM.

I didn’t appreciate it immediately, but John’s BIM overview was a good lead-in to the afternoon session, led by Jeremy Larson, on the Viewpoint product roadmap (at lunch, Viewpoint’s VP Product Management Rob Humphreys told me that around 22% of Viewpoint ERP customers were already using the product “in the cloud”). Jeremy started by looking back briefly at the history of the Viewpoint system architecture, noting that it tended to go through major changes about once every seven years. The last big iteration of Viewpoint’s core ERP system was in 2007 when it released its V6 Windows product and the next big change would see this and other products in the company’s portfolio undergo a gradual “unification” of products (Viewpoint CEO Jay Haladay stressed this was “evolutionary not revolutionary”). The aims are:

Viewpoint’s future users are also expected to be increasingly mobile (I learned that, in addition to 4Projects’ 4Mobile – post, Viewpoint also has field data capture applications supporting its US ERP solutions, including one acquired as part of the February 2014 Maxwell Systems deal), and the business will extend access via Android and iOS devices first, then Windows. Echoing the mention of ‘social’ earlier in the day, Jeremy also stressed that “social is becoming part of construction” and he showed some user interface concepts clearly strongly influenced by current social media platforms.

These prompted some debate among the 4Projects users in the session, mostly information managers responsible for administration of the 4Projects collaboration platform across large organisations and even larger supply chain networks. Roll-out of previous upgrades of the core platform hadn’t been without occasional problems, it seemed, and the somewhat radical new ‘look and feel’ was seen as a major step change, likely to add to the disruptive effects of increasingly wider adoption of BIM for UK project delivery in 2016. Jeremy, Jay and the other 4Projects staff listened carefully to the points and promised to consult and inform as widely as possible and to roll-out new developments with as much education and support as possible, deploying new “learning services” people to assist with the process.

[Disclosure: 4Projects paid my travel and overnight accommodation costs to attend; prior commitments prevented me joining the first day.]

Permanent link to this article: http://extranetevolution.com/2014/05/4projects-the-future-is-cloud-based-everything/