Some four months after acquiring Paris, France-based mobile AEC software developer Wapp6, Munich- and Woking-based Conject presented its defects management solution, OPR6, to audiences attending two seminars at London’s Thames-side National Theatre this morning. The events attracted some 170 registrations, underlining the growing interest in mobile construction solutions, though pouring rain and the after-effects of a two-day London tube strike may have affected attendance. Still, I estimated over 100 customers and prospects attended (I tweeted from the events – all on Storify here). 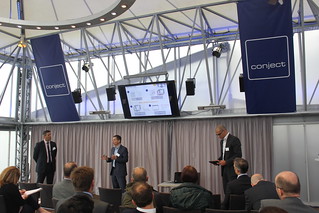 The seminars were co-hosted by Conject sales director Duncan Kneller and Wapp6 CEO Franck Meudec, with audiences including construction client (ie: owner/operator) representatives, consultants and contractors. Many were familiar with the Conject SaaS application, and it was clear from questions that existing users were looking for close integration between the mobile application and the web-based Conject system. Fortunately, the OPR6 system is not restricted to one platform; the mobile defects solution (aka ‘snagging’, punchlists, etc) was demonstrated on an Apple iPad, but is also available on MS Windows and on Android (subject to identification of suitable devices, recognising the profusion of different functional capabilities available in Android).

Conject acquired Wapp6 partly because of its cross-platform capabilities, and because it immediately gave it a mature product with a substantial track record and user base – Franck said OPR6 had so far been used to capture some seven million defects. Aggregating and analysing this volume of use, he estimated that typical construction projects generally have around one defect per square metre of development, and yet much of construction remains reliant on paper-based processes. 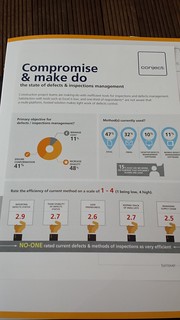 Even where projects use IT for defects and inspections management, Conject’s research (based on responses from 340 industry professionals in March 2014) showed generic office software remains commonplace: 47% used Excel, 32% used email; desktop or mobile defects solutions were used by just 21%, with Word also used by 15%.

Franck said it was focused on delivering user-friendly construction-oriented applications that enabled secure* cross-platform access to data anywhere, anytime, 24/7. Conject’s OPR6 is currently provided in four languages, and each project is logically presented as a series of zones, phases and processes. Among the stand-out features he showed was the ability to ‘favourite’ a defect type so that common defect types could be quickly recalled and swiftly added to the project project. As with most mobile solutions, these could be marked on a drawing and be associated with photographs (marked-up, if required). With the app, Franck said, a user could capture as many as 500 defects in a half-day inspection.

The company was clearly keen to show OPR6 is more than a point solution focused on defects. It demonstrated the current web-based reporting back-end, with data summarised in statistical, listing and drawing views, and then previewed a forthcoming release (available from the end of May) which showed a much richer graphical dashboard. Bar- and pie-charts could be quickly created, and from each graph, users could drill into the segment of the bar or pie to see the supporting data. Workflows can be quickly configured via a drag-and-drop flow-chart tool, and – bearing in mind Conject’s experience with complex contract management processes – it is clear the company sees the mobile platform as supporting more than defects management in the future.

Having looked at other mobile defects management/snagging/punchlist solutions, Conject’s AEC mobile solution is immediately mature and user-friendly. Compared to point solutions, it has strong web-based reporting functionality (not just another Excel export), and there is a strong drive to reflect the needs of the ultimate owner/operator of a built asset. Expanding on the functionality of the core SaaS platform, it can be used, for example, to help benchmark the quality performance of suppliers both on their initial work, and/or their efficiency in closing-out defects.

The presentation was timely – I visited a contractor using a competing solution last week – so I could contrast and compare the depth of process support. Conject still has some way to go in terms of the depth and range of its field capabilities, but my initial impressions of the integration of the newly acquired platform with the core system were very positive, and the previews of what will be in future software releases were encouraging.

By the way, I still have no idea what “OPR6” stands for (even the UK Conject staff I spoke to were unsure). From a marketing perspective, perhaps the product needs to be rebranded for the Anglophone market so that it is clearer what the solution does and which market it serves.

* (Note: I understand the sudden appearance of a ‘not safe for work’ video in the first seminar was due to sharing the venue’s wifi network; Conject’s iPad inadvertently auto-connected to content being accessed by another user on the same network.)

Permanent link to this article: http://extranetevolution.com/2014/05/conject-fleshes-out-its-mobile-defects-offering/