Proposed EU changes to national Freedom of Panorama (FoP) rights could affect individuals and organisations taking photographs or videos of construction works and sharing them in commercial platforms.

Freedom of Panorama (FoP) is a somewhat obscure provision in copyright law that allows people to take photographs or video of buildings and and other works in public places without infringing any copyright, and to publish such images. This right prevails in the UK and in certain other parts of Europe (the Netherlands and Germany, for example), but not in others (eg: France, Italy, Greece). However, our continued freedom to take photographs and to use them (in brochures, on websites, in social media, etc) is threatened under proposals tabled by members of the European Parliament (see my PR blog post: PR use of public images under FOP threat; UK national newspapers are also now picking up on the story too – see today’s Daily Telegraph and Daily Mail pieces for example). 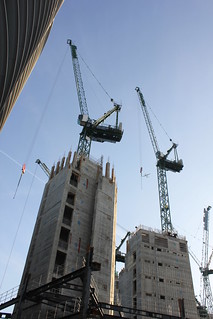 Briefly, copyright reformers led by a German politician Julia Reda MEP would actually like to introduce UK-style FoP across the EU. But other MEPs are proposing a non-commercial limitation clause in the FoP rules which would make it useless. As a result, taking shots or video for PR, professional or educational purposes against the backdrop of well-known public buildings, or even posting your snaps on commercial platforms such as Facebook, Flickr or Instagram, could potentially breach the building designer’s copyright. For a great many construction businesses, for example, limiting UK FoP could mean their marketing collateral breaches copyright – many companies showcase past and current projects in brochures, datasheets, case studies, websites, blogs and other social media (#ProtectFOP or lose your marketing collateral).

This got me thinking about other use of photographs and video in construction. Plainly, construction professionals today use photography and video extensively to document (for both personal and company use) the different stages of a construction project, from the earliest planning stages through to project completion and beyond. While some of these progress images will be captured within the construction site perimeter, technically there may still be issues if they show neighbouring buildings outside the site. And on many projects, site progress shots and time-lapse videos are often taken from public spaces outside the site boundary; if UK FoP rights are changed, architects and other designers may need to approve image use by others (or at least perhaps grant a license to project team members allowing images to be used for project purposes), including in online construction project management applications.

According to newspaper reports, the RIBA opposes the proposed changes. The Daily Mail reports a statement to The Times:

We are concerned that the well-intentioned proposals to ensure that architects are paid for the use of images of their work by commercial publishers and broadcasters would instead have negative implications and represent a potentially damaging restriction of the debate about architecture and public space.

Reactions to my first blog post on FoP were broadly incredulous: “bonkers”, “scary”, “unworkable”, “unnecessary”, “extremely worrying”, “ominous”, etc. I seriously doubt that architects, engineers and other design firms will be keen to, or even capable of, administering a potential flood of incoming copyright license applications. And, even if the FoP changes were enacted by the European Parliament, I suspect the UK might somehow seek an exemption to preserve the status quo.

(A lobbying campaign on behalf of cultural and heritage organisations, ahead of a crucial vote on 9 July 2015, is being coordinated by Wikimedia UK’s Stevie Benton [email].)

Permanent link to this article: http://extranetevolution.com/2015/06/progress-photos-at-risk-of-fop-changes/