Sypro CAM (not a webcam)

AECOM’s ProjectHub programme puts a consistent user experience of Bentley ProjectWise at the fingertips of up to 100,000 knowledge workers worldwide.

One of the Be Inspired Awards finalists at the 2015 Bentley Systems Year in Infrastructure conference was the international multidisciplinary consultancy AECOM. As noted in November, AECOM had signed an enterprise deal to extend its ProjectWise corporate commitment, and its (winning) entry in the “Innovation in Project Delivery” category related to a global ProjectWise implementation extending the reach of the collaboration platform across some 600 offices in 160 countries worldwide, supporting a potential user-base of 100,000 knowledge workers. 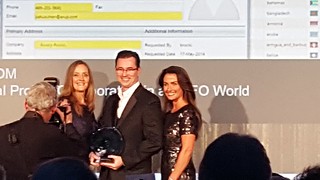 As one of Bentley’s strategic partners, AECOM worked closely with the software business to expand use of ProjectWise via a network of seven data hubs (six currently operational in north America, Europe, the Middle East, southern Africa, southeast Asia, and Australasia, plus a further hub to come online in south America). Integrated with AECOM’s intranet, CRM system (Salesforce) and other corporate systems, the ProjectHub system gives AECOM staff a consistent ‘window’ into the company’s back-office and project delivery systems, with rapid and reliable access (at LAN/WAN-type speeds) to the most up-to-date information on any project – maintained by cache servers using delta file transfer.

Phoenix-based AECOM global project collaboration manager Kevin Albright presented the various constraints the business faced – company-wide adoption of BIM, the laws of physics (“basically we can’t share information faster than the speed of light”), security, the need to support multiple languages, helping workers be self-sufficient in IT, eliminating disciplinary or information ‘silos’, and creating a common user experience – and he started this supported by just 2.5 (full-time equivalent) staff.

He said ProjectWise was “the obvious choice”, “the most mature tool”, scaleable, and almost infinitely flexible (over one million configuration options) but wasn’t dependent upon everyone using other Bentley products (“ProjectWise is application-agnostic – we have lots of Revit users too”). It was also simple to start using; Albright showed the simple system icons and ‘software wizards’ used to help set up projects consistently on the system, and described his team’s philosophy of “Just in Time learning – what you need when you need it”, incorporating written help, graphics and video guides that anticipate commonly asked questions. The system’s support site is hosted by Bentley but populated by AECOM materials crowdsourced from its users.

ProjectWise was already used within AECOM (sufficiently widely that no other vendor could realistically be considered, Albright told me later) but the number of early adopters grew rapidly (400%) to over 20,000 in just over a year (a ‘dashboard’ screengrab showed over 3000 projects, around 6m documents, 68,000 user accounts and 23,000+ active users). The system was not mandated within AECOM but the impressive growth was achieved organically by grassroots adoption.

Benefits already identified include reductions in lost information, less rework from working on the wrong information, and the creation of a history and knowledge base for each asset. Automating, simplifying and reducing project administration tasks has cut the time associated with project start-up. And the use of local hard-drives has been replaced by the ProjectWise cloud, helping also to centralise system administration to a handful of individuals worldwide. Albright said “If the system increases resource utilization by just 2 percent, AECOM will save hundreds of millions of dollars on an annual basis.”

Talking to him after the finalist presentation, he underlined the importance of security:

“With unrest in the Middle East and concerns about east/west relationships, our clients want to know where their data will be hosted and which geographies it might pass through en route. When users set up a project they select the hub most appropriate to their project needs and client data is only hosted in that centre.”

Arup use ProjectWise for BIM

Another finalist in the same category was another multidisciplinary practice, Arup, who described their ProjectWise-based approach to developing and maintaining a BIM template for their UK-based operation, looking to help its people apply consistent and compliant business processes relating to BIM. While not as wide-reaching as the AECOM implementation, Arup identified significant benefits including rapid mobilisation of new BIM projects (a 2-10 day process could now be completed in under two hours (saving an average £1000/project), a 10 percent efficiency saving in use of draughtsman time (worth over £160,000/year), and delivering a marketing advantage.

It was interesting to hear an enterprise case study on a ProjectWise adoption, but this is on a vastly different scale to most implementations. It looks to emulate the scalability and ease of startup and use claimed by some of the pure-SaaS construction collaboration vendors but reflecting exacting company-specific requirements and retaining the core infrastructure within the enterprise.

Other corporates have opted for rival solutions such as Aconex – the Australian SaaS vendor did three major deals, with Bechtel, Lendlease and John Holland, in June/July 2015, for example – which effectively allows them to outsource some risks relating to hosting to a specialist external provider. However, the AECOM/Bentley relationship is clearly close and committed on both sides, with Albright saying they were “co-developing” new capabilities to support their partnership.

For me, it was also a useful reminder that SaaS is not “the only game in town”. Two major consultancy organisations may use other platforms when required by their clients, but otherwise their corporate policies (and an aspect of market differentiation) are to host their clients’ data using a cloud solution that is retained within their own IT set-up.

[This is one of several blog posts held over from 2015 due to pressures of other work; I aim to publish the remainder of the backlog during January 2016. – Disclosure: I attended the Bentley Year in Infrastructure conference as a guest of Bentley Systems, who paid my hotel expenses. I was also a juror in the BE Inspired Awards, and judged the ‘Innovation in Project Delivery’ category.]

Permanent link to this article: http://extranetevolution.com/2016/01/aecom-takes-project-collaboration-global/