UK construction collaboration technology vendor Viewpoint grew revenues 30% in 2016 to £15.1m, reported a £2.5m profit, and is bullish about its 2017 prospects.

Viewpoint‘s EMEA operation has shared its latest financial results with me, showing the Newcastle, UK-based SaaS construction collaboration technology vendor has increased revenues 30% year on year, in the year to 31 December 2016.

Reported revenues for Viewpoint Construction Services Ltd were £15.097m (roughly US$20.47m or €18.49m), compared to 2015’s £11.587m. Growth, while still healthy, was down from the previous “bumper” year’s 48% – reflecting some uncertainty resulting from the UK’s Brexit situation (a factor that softened Aconex’s forecasts in March this year too) and the resulting weakened pound.

While the revenue growth rate may have slowed from the 48% reported in 2015, the result underlines how far Viewpoint’s combined SaaS collaboration and mobile business sits ahead of its principal UK-based competitors. Reading’s GroupBC grew its revenues 33% in 2016, while London’s Asite was up 14% to 30 June 2016. 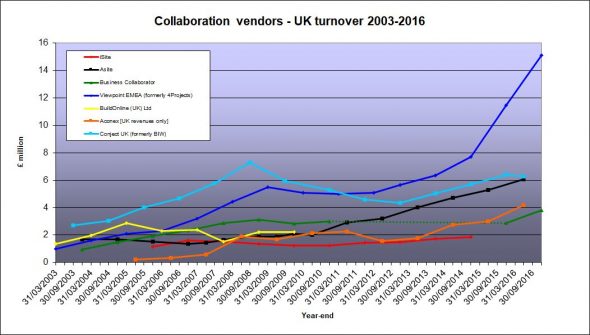 Two of Viewpoint’s principal competitors in the international SaaS space both reported similarly strong revenue growth. In May Germany’s think project! reported 30% sales growth and said underlying revenues grew 17% in 2016, while Aconex enjoyed 31% growth in the year to 31 June 2017 (and its UK operation grew revenues by nearly 40% – see final section below). 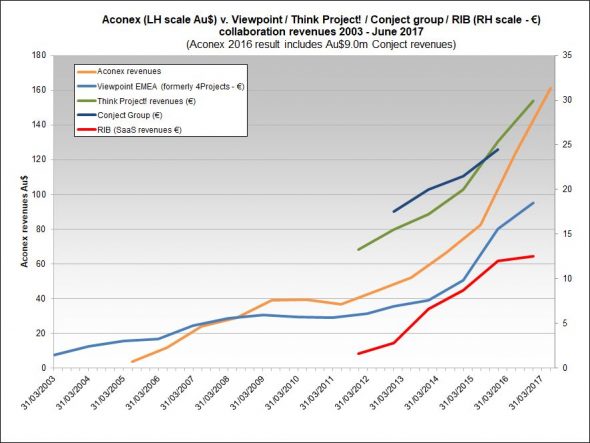 After the losses reported in the past two years, Viewpoint EMEA has returned to profit, declaring a pre-tax profit of £2.495m (roughly US$3.38m or €3.06m), and returning it to the kind of profit trajectory it enjoyed before the February 2013 Viewpoint deal and the December 2014 acquisition of MCS/Priority1 (now Field View). The UK business says it makes up 12% of the global Viewpoint group.

During quarter 4 of 2016, Viewpoint says it saw a growth in sales of 16% compared to quarter 1. There has also been an increase in orders received during the early part of 2017 leading the directors to be confident that sales in 2017 will increase on 2016 levels. Total order intake in 2016 was £10.2m. The company also shared a 12 month view of forecast demand from key customers: at 31 December 2016, the company had orders outstanding of £10.1m.

The number of customers at the year end stood at 207, up 16% from 2015, while the user base continued to grow, increasing 67% from the previous year – a total of over 85,000 new users, or over 7000 new users per month – contributing to a global total of over 450,000 users worldwide, located in 170 different countries. Use of Viewpoint’s Field View has also been expanding: it added over 1400 new projects in 2016, and over 10,000 new users of the mobile platform; the user base created over 1.3 million tasks during the year. 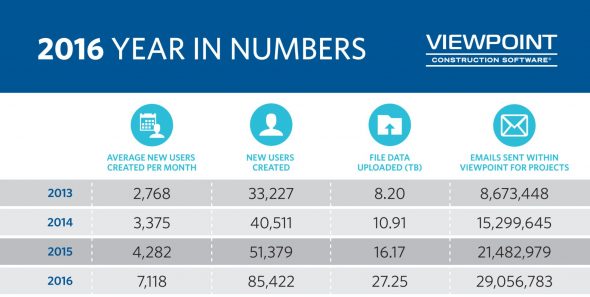 The above UK vendor graphs incorporate updated figures for the UK operations of Aconex and Conject in the year to 30 June 2016 (Conject’s report was for the six months from its previous year-end of 31 December, as the businesses align their reporting periods). The reports mainly cover the period before the merger of the two parent groups, and before the EU referendum.

When the combined group reported its annual results to 30 June 2017 in August, it said a factor in its 31% revenue growth was its first full-year contribution from the former Conject operation.

Permanent link to this article: http://extranetevolution.com/2017/10/viewpoint-emea-revenues-up-30-in-2016/