Procore’s Groundbreak included news of a new acquisition – US estimating software provider Esticom – and a slew of product announcements, but no mention of the IPO, seemingly delayed due to the continuing impacts of the pandemic.

The week after Bentley Systems’ Year in Infrastructure 2020 (see previous post) was Procore‘s annual Groundbreak event, also – because of the global COVID-19 pandemic – switching from an in-person convention to an online event. In previous years, the California, US-based construction project management SaaS vendor had held three-day events in Austin, Texas ( 2017 and 2018) and Phoenix, Arizona (2019), with keynotes from the CEO and other executives, sessions from partners in the expanding Procore marketplace, and other industry talks.

For 2020, Groundbreak featured Procore people mainly talking from the silence of their offices in pre-recorded keynotes, sometimes interspersed with contributions from colleagues, customers or end-users. The key news included an acquisition, and a slew of product announcements. The company’s proposed IPO, announced in February 2020 (post) – and later seemingly shelved – went unmentioned, at least in the handful of sessions I watched.

Procore founder and CEO Tooey Courtemanche, right, and SVP of product Wyatt Jenkins (who joined Procore in April 2020) both talked about the impact of the COVID-19 pandemic and the product changes that Procore had made in response (like its competitors – post). Notably, it had developed integrations with video conferencing solutions including Zoom, Microsoft Teams and GoToMeeting. The Procore marketplace of integrations is over 200-strong, but the company’s own product portfolio has also been expanded.

“We welcome the Esticom team …. Procore is investing in the future of preconstruction, an increasingly important and impactful part of the construction process. Together, Procore and Esticom will deliver a single, comprehensive preconstruction solution on the Procore platform, with data connectivity that helps customers track costs and accurately predict estimates.”

Procore says it will fully integrate Esticom into the Procore platform in 2021. In the interim, Esticom will remain a partner on the Procore App Marketplace, with an existing integration where estimates can be exported to generate a project budget directly within Procore. Current Esticom users will continue to be supported as usual, and the product is available for purchase through Esticom.

A recurring theme throughout the product keynotes was the Procore platform. Courtemanche and his colleagues repeatedly stressed the value to contractors  and subcontractors of having all their project information on a single platform that could be connected to marketplace partner solutions. Case study examples included a US-based photo management software, StructionSite, which enables users to view videos and photographs (via drawings) in the context of the project location in which they they were captured – no need to switch between two disconnected solutions.

Procore has added some artificial intelligence functionality to its platform, mainly through its acquisition in February 2020 of an AI firm, Avata (for a reported US$3.8m), which had developed a ‘natural language assistant’ which automated some information tasks. Procore says (news release) it is further investing in ways to automate repetitive laborious tasks, uncover hidden information, and provide actionable insights to drive better outcomes for its users. Highlighted AI features include Search, Submittal Builder, and Predictive Analytics. 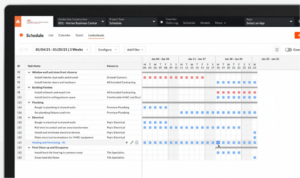 Compliance management for safety and quality has been enhanced by new Action Plans functionality (news), enabling teams to build a step-by-step execution plan for project tasks to simplify collaboration and maintain individual accountability.

And Procore has added a new Lookaheads feature, right, to its schedule tool. This addresses the detailed weekly and monthly planning processes critical to effective coordination of field teams and trade partners. Conventionally, this was often managed using a whiteboard and sticky notes, but the new feature shifts this to an online environment. This is an interesting area of technology that EE has covered in the past – for example, US-based Newforma’s LeanPlanner (October 2015 post), the UK’s Aphex Planner (Februrary 2019 post)  and, in a BIM context, Finland’s Visilean (March 2018 post).

This was my first experience of Groundbreak (hardly surprising as previous years’ events would have involved the time and expense of a flight to the US), so, while I can’t compare it with previous years’ editions, I can at least contrast it with the recent online Bentley YII2020 experience.

Both were distinctly US corporate, though there were occasional non-US voices to show both firms were more international. Bentley probably had much greater reach in this respect, with projects and case studies from multiple continents, and also acquisitions that have diversified the group. The greatest contrast was in focus: Bentley is an engineering design business now expanding into the construction management field and beyond; Procore is widely used by small-mid-sized contracting firms [see update below], but also trying to expand into support for pre-construction activities. And, despite expansion into Australasia, c. 2017, and the UK and Ireland, I estimated around 90% of the imagery used in Groundbreak came from Procore’s north American heartland – the business is still heavily US-centric, probably reflecting where most of its revenues come from.

It will also take time for some of the Procore product enhancements to reach customers and end-users outside north America, particularly when it comes to things like estimating or financial management, where processes are often quite specific to particular national markets.

In his YII2020 keynote, CEO Greg Bentley was able to reflect on Bentley’s successful IPO (post), but his Procore counterpart Tooey Courtemanche was unable to do the same. Procore’s proposed IPO, announced in February 2020, was immediately put into doubt as markets plunged during the early weeks of the COVID-19 pandemic (post). US industry watchers (eg: Bloomberg, ConstructionDive) suggest the IPO has been shelved until better economic times return. Instead, Procore continued with further capital raising based on a company valuation of $5 billion, closing a US$160m round in mid-2020, while also quietly shedding some jobs. On 28 July 2020, Courtemanche announced “a single-digit percentage of the roles at Procore are being eliminated today”; media reports suggested around 180 people were set to lose their jobs.

COVID-19 will continue to challenge the global construction industry, potentially also causing further job losses. As the UK enters another national lockdown, construction has been told it can continue, but as ongoing projects are completed, there are signs that two tracks could emerge – a relatively buoyant civil engineering and infrastructure sector, and a more stagnant building sector, particularly when it comes to commercial and leisure developments. On the face of it, Bentley is well-placed to support the strong civils track, but Procore’s prospects will partly depend upon where its many SME customers are working. However, Procore believes digital transformation has been accelerated by the pandemic (Procore: Lockdown accelerates demand for digital transformation), so, like most vendors, it is well-placed to help businesses maintain and even improve productivity. Whether the industry at large is able to adapt to the realities of a post-COVID economy is another matter….

“Procore connects key construction stakeholders – owners, main contractors, subcontractors – from small and medium-sized businesses up to global enterprises. We have a mature customer base across all of these segments, with over 9,500 customers and 1.3M+ users worldwide. We work with customers of all sizes to identify and build better solutions for the construction industry, including some of the largest contractors in the world. We are continuing to invest in our growth in EMEA, and have recently added several customers with annual revenues in the hundreds of millions.”

Permanent link to this article: http://extranetevolution.com/2020/11/procore-acquires-estimating-esticom/

This site uses Akismet to reduce spam. Learn how your comment data is processed.