Finalcad – from BI to BIM

Last week’s Ecobuild exhibition in London gave me chance to catch up with Paris-based Finalcad, developer of a mobile-first construction quality management application. Readers may recall that I talked to the business’s Baptiste Joyeaux in the summer of 2015 (see Finalcad expands beyond France), and that its product – widely used in France and in Singapore – had also been deployed by property developer Mount Anvil on a multi-storey residential project in London (post). At Ecobuild, marketing director Aurelien Blaha updated me on two areas of Finalcad data exploitation.

Finalcad had entered the market primarily as a snagging (aka punchlisting, defects management, quality reporting) platform, and – like some similar tools – it had also expanded to cover other common site-based processes. Most vendors in this space have focused on summarising this information to managers of individual projects; some have expanded this to enable customers to see reports across multiple projects; Finalcad has taken an additional step to publicly benchmark the performance of hundreds of workers across thousands of projects. 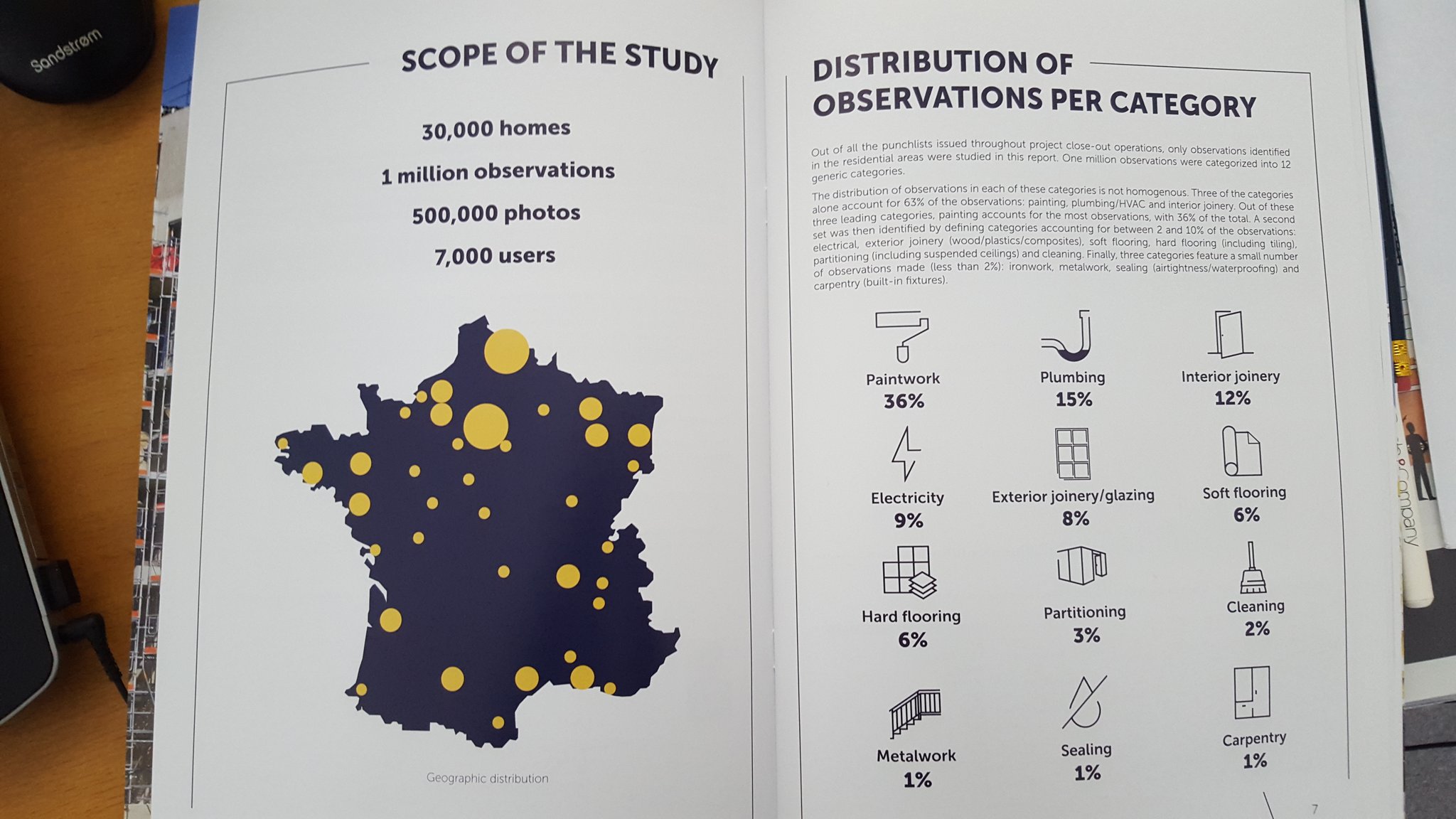 In September 2015, it publilshed its first ‘Construction Observatory’ report (download here, email registration required), looking at public housing construction across France. The study was compiled from a million defects reports, including 500,000 photographs, captured by 7000 users in around 30,000 homes. Among other findings, the study identified that painting, plumbing and carpentry accounted for 63% of all observations gathered in homes.

By aggregating the information, the sources and locations are anonymised, and the data becomes a neutral benchmark of industry practices – valuable to:

“BIM with Boots On”

FinalBIM indicates the direction of travel at Finalcad. It is looking towards a future where BIM-originated design information can not only be interrogated from the field and used for reporting, but also for live updating of as-built information. At BIM World in Paris next month (6-7 April 2016), Finalcad will be launching a BIM with Boots On white paper, outlining closer integration of office-based design work and on-site activities.

Finalcad has developed BIM solutions for structures and for finishes. Aurelien demonstrated how BIM data about individuals objects or elements (individual pile caps, or doors, for example) could be accessed in the field. As-built variations against the design can be reported back from the field and reported directly to the model authoring application – “challenge the ‘as-planned’ model with the ‘as-built’ model.”

The company’s heavy use of photographic evidence has also helped it to develop “image recognition” tools that can automate steps in site reporting. Finalcad is experimenting with deep learning and neural network approaches that enable its software to recognise objects on site and to automatically apply relevant metadata to them, so that the user has fewer fields to manually complete, Aurelien said, explaining their “three tap” user interface philosophy. The image recognition also extends to optical character recognition so that written data (equipment model and serial numbers, for example) can be captured and reported back to the model.

Permanent link to this article: https://extranetevolution.com/2016/03/finalcad-from-bi-to-bim/