California, USA-based EADOC was acquired by Bentley Systems in March 2016, and the process of assimilating this cloud-based construction management application into the Bentley suite of products began. I talked to EADOC founder Eric Law soon after the acquisition and again at Bentley’s 2015 Year in Infrastructure conference in London and also heard about the platform’s use on a Californian sewerage project (post). Roll forward a further year to the 2016 edition of the Bentley conference and EADOC was showcased in a BE Inspired Innovation in Construction award entry, concerning a US$42.6m project to close a dump site at Ordot on the Pacific island of Guam (while it did not win this category, the project was announced as the winner of a special award for advancing construction management). 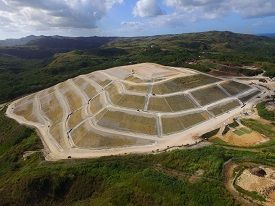 The dump dated back to the 1940s and the island’s occupation by the Japanese during the Second World War. After the island was liberated by US forces, the dump, originally in a small valley near the village of Ordot, continued to be used by the island’s authorities, and by the start of the 21st century had grown into a substantial mound. With the dump no longer able to accept new waste and creating environmental problems (polluting local water courses through leachate and releasing methane to the atmosphere), in 2004 it was decided to close the dump.

This process was prolonged by legal disputes, and ultimately the client for the dump closure was a US Court Official Receiver, working with the Government of Guam, the US Department of Justice and the US Environmental Protection Agency, plus the Guam Solid Waste Authority, which would operate the facility for 10 years beyond the completion of the dump closure works. Other stakeholders included the local mayor and residents, Guam EPA, the State Historic Preservation Officer and the US Army Corps of Engineers.

Baron explained the EADOC system helped share information across all these stakeholders (located across 10 time zones, ranging across the US from Washington on the east coast to California in the west, to Hawaii, Guam and locations in Asia), as well as the project supply chain. “No bad publicity” was a key requirement, he said – the EADOC portal helped the team communicate effectively despite the large volumes of project documentation involved.

The works involved creation of a cover system to prevent further water ingress and protect the dump from erosion. Leachate management, stormwater collection and landfill gas extraction systems were also provided, as well as a stream channel relocation and addition of a sanitary sewer system. The leachate collection system has three storage tanks with a total capacity of 65,000 gallons, while the stormwater management system incorporated four ponds as well as emergency spillways. These are vital as Guam is in a tropical storm zone – during the project, six major storms hit the island, with peak rainfalls of over 12in (30cm) and winds in excess of 110mph.

Using EADOC, Carbullido said the team was able to provide automated numbering, centralise design and submittal processes, and reduce the average time taken to process requests for information (RFIs) from an industry norm of 10-14 days down to six days. Correction Required Notices (CRNs), Design Clarification Memos (DCMs) and daily reports were all managed using the system. During the project, the contractor filed multiple claims due to bad weather totalling 200 days; these were evaluated using information captured in the EADOC system. As well as the written daily reports, EADOC had also been capturing data from other systems: from weather station logs, site video monitors (taking 1000s of images/day) and aerial drone photography. In the face of this evidence, the time extension was adjusted to 107 work days. EADOC was also used to manage the time impacts of encounters with unexploded ordinances dating from the dump’s wartime use. 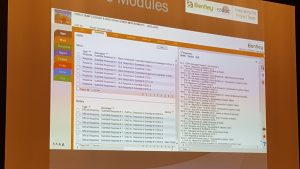 The GHD team estimated that the EADOC system saved over 400 hours through more efficient management of submittals and RFIs alone, and reckoned it also saved another 400 man hours relating to faster location of information and other process efficiencies. Feedback from the owner, contractor, designer, subconsultants and other team members indicated they also benefitted from the system; claimed benefits included a saving of over 100,000 sheets of paper.

I was interested to see that the EADOC interface still hadn’t been redesigned to look like other Bentley applications, but, amid a Bentley campaign of convergence, I understand EADOC will shortly be rebranded as ProjectWise CM.

Permanent link to this article: https://extranetevolution.com/2016/11/ordot-dump-closure-showcases-bentley-eadoc/